A landscaping company built our retaining wall over our neighbors’ property! Now we must pay to have it taken down and rebuilt onto our property.

"The eighty-year-old home required immediate repairs both inside and out, so the seller was motivated, and we got a great deal, or so we thought!"

Last year my partner and I purchased a home near Atlanta in the Virginia Highlands neighborhood. The eighty-year-old home required immediate repairs both inside and out, so the seller was motivated, and we got a great deal, or so we thought!

Some of the companies who made estimates for the seller were not returning our phone calls and those who did claimed the bids were either extremely low or simply impossible! So, we began calling local professionals for realistic estimates of repair. The new bid numbers were much higher than anticipated; so, we prioritized the most important repairs.

A Google search returned Wall Pros, a contractor who builds and replaces retaining walls in north Atlanta, including Virginia Highlands, and we even saw some of their work first-hand at another home just a a few blocks from our home. The estimate to replace the wall included a topographical survey, engineering, a site plan and permitting costs which was nearly as much as the cost of the retaining wall replacement itself!

"After they left, he suggested that the retaining wall could be replaced at far less cost by skipping the paperwork."

Our landscaper happened to be working the day Wall Pros estimated the retaining wall replacement. After they left, he suggested that the retaining wall could be replaced at far less cost by skipping the paperwork. He told us about his cousin who builds hardscapes for several retaining wall contractors and asked if he could price the job. We saw no harm in getting one more estimate, so we agreed.

Without the cost and hassle of paperwork, the price was far less than the first estimate and we agreed on the spot! The new retaining wall was completed in just two days; so we called the driveway contractor to pour the driveway. When he arrived he asked if I had my neighbor’s permission to build on his property. I had no idea what he meant! He asked for the survey and site plan for the retaining wall, but of course we had skipped all that and so I assured him that everything was OK.

The next day as I arrived home from work, I noticed my neighbor standing next to several large wooden stakes above and below the new retaining wall. Apparently, most of the new retaining wall was built about two feet on our neighbor’s side of the property line. Our neighbor was not pleased but as long we rectified the situation, he would be happy. 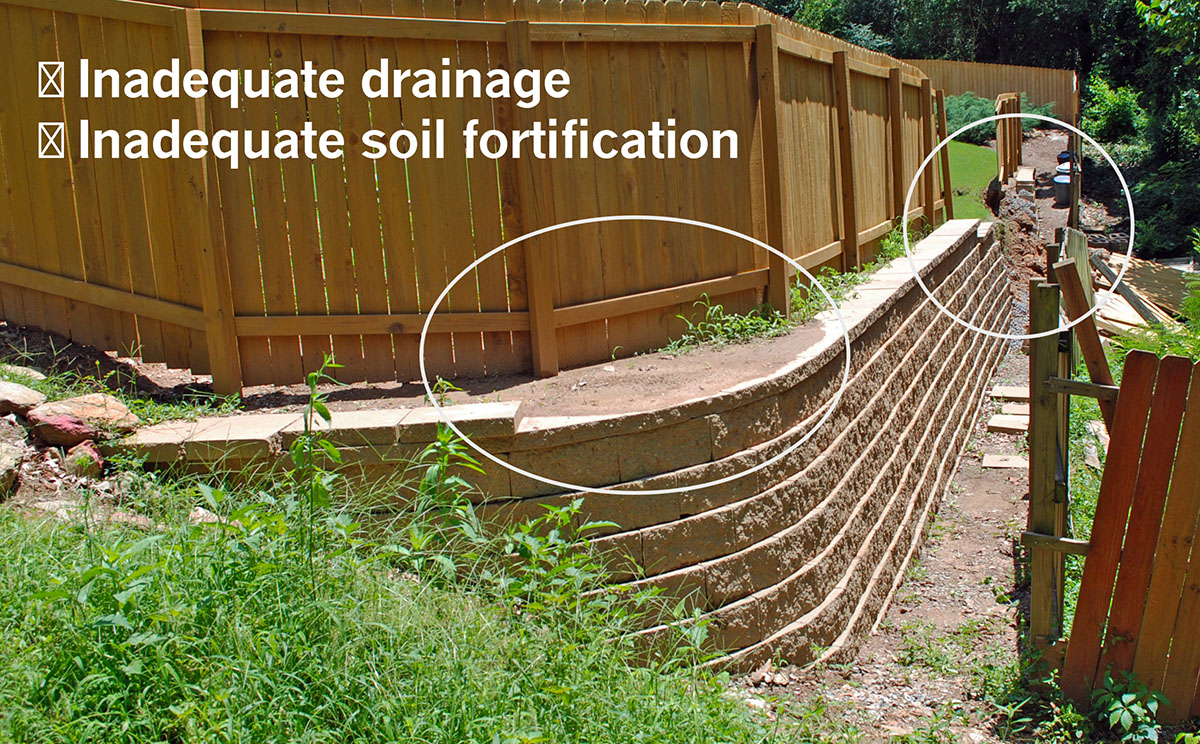 It honestly never crossed our mind that we were building on our neighbor’s property or as I later learned that landscape timbers were banned for the construction of retaining walls in our area.

"Thank God the new driveway had not yet been installed over the retaining wall."

Thank God the new driveway had not yet been installed over the retaining wall.

The Wall Pros sales representative informed us that the reason the survey was required by the city was to prevent this very issue. He also said that they lose lots of jobs to lower bids by landscapers who either don’t or can’t do the paperwork, which invariably leads to trouble!

The paperwork is cumbersome and often expensive, but at the end of the day, it is designed to protect the consumer; I realize that now. That’s why I encourage everyone to get the facts first! I would have saved money by simply following the regulations for the construction of new retaining walls the first time. Looking forward to seeing my contribution to your website!